Mountains and Gods: Why the Tallest Mountains are Revered in Tibet 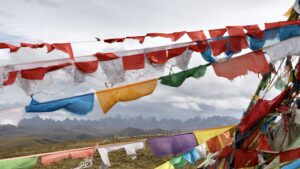 If you’ve ever seen a documentary about climbing Mount Everest, you have probably seen Sherpas leading expedition teams to make offerings around a monument of stones and prayer flags near basecamp as they set off to climb. 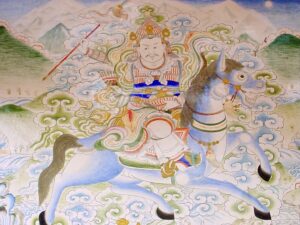 Tibetans believe in gods who inhabit the tallest mountains of any region. This deity is understood to be over the region and acts as one who rules the affairs of his territory. Incense are offered daily to appease the mountain god who is not necessarily seen as a benevolent being toward villagers or nomads who live nearby. As travelers cross high mountain passes they will often offer “wind horses” to do the same.

Who are the Mountain Gods

Tibetans are known to most around the world as Buddhists, but how does the idea of holy mountains and mountain gods fit in with Buddhist teachings? This is one of the unique teachings of Tibetan Buddhism, which borrows heavily from the pre-Buddhist religion known as Bon. Bon traditions closely follow practices related to mountain gods, as does Tibetan Buddhism today.  In fact, if you talk to the average Tibetan about their faith, they will tell you of the practices related to the mountain god.

When Tibetans experience trials or difficulties, one of the first considerations they have is what they have done to offend the local mountain god. From the smallest situations like the death of a domesticated animal, or larger events such as natural disasters, Tibetans see the source of such events through the lens of their relationship with the god of their mountain. When bad things happen, they will seek help from lamas in the local monastery to determine the source of their offense and what they must do to rectify the situation. There is a great deal of overlap between the role Buddhist institutions and mythology in Tibet. 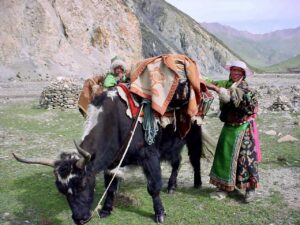 Pilgrimages are often performed around holy mountains so it is common to see Tibetans on the trails that make up these pilgrim circuits. Prayer flags and other religious symbols or items are found in great numbers when near holy mountains. 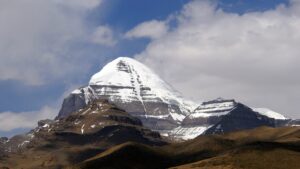 Mount Kailash གངས་རིན་པ)་ཆ+, in far western Tibet, is the holiest of all the mountains in the broader Himalayan region. Though it is only 21,778 feet tall, it holds a huge position in the minds and hearts of those who see it through a spiritual lens. It is the most sacred of all mountains to Buddhists and Hindus as well as the practitioners of Jainism and the pre-buddhist religion of  Tibet known as Bon. Kailash is considered to be the axis of the world with its four faces nearly aligning with the cardinal directions. The mountain has never been climbed.

Several notable holy mountains in the Amdo region of the Tibetan Plateau include Nyanbo Yurtze, Amnye Machen, Leng nga Zhaga, and Shar Dongri (also known as Xuebaoding). These are pictured below: