To Be Sherpa is an Ethnic Heritage, Not a Profession

The Sherpa are one of many ethnic Tibetan groups found throughout the Himalayas. Many Sherpas live in Nepal but they can also be found in China and India.

The Tibetan meaning of Sherpa can be derived from the two words that make up their name. Shar ཤར which means  “east” and ba པ which means “people.”

Who Are The Sherpa?

The Sherpa have their own language, also known as Sherpa. In fact, this is the case for most of the distinct Tibetan groups throughout the Tibetan Plateau and greater Himalaya region. The three largest groups are:

Culture, religion, and lifestyle are very similar across the various Tibetan groups. The key distinction between them all is language.

Geography and The Sherpa

The geography of the region is among the biggest contributing factors to language differences among Tibetan groups. The mountains are tall and the valleys are deep. Even with modern technology, it is difficult to traverse the roof of the world. This means communities often live in isolation which allowed for languages to become more localized and distinct and remain that way today. 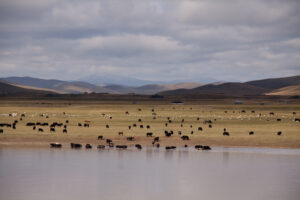 Languages Across the Region

The most broadly spoken languages across the Tibetan Plateau are among nomads. The nomad dialect among the Amdo is one of the most broadly spoken of all the Tibetan languages. It is similar for the Kham nomads. In fact, Kham nomads and Amdo nomads can communicate with one another on basic topics. This is not true for many Tibetans. Their languages are mutually unintelligible to one another.

As one moves beyond the grassland regions that cover large stretches of the Tibetan Plateau  and enter into the rugged mountain regions that line the eastern, southern, and western borders of the plateau, the Tibetan languages become more distinct. Ethnic groups identified by their language are more numerous in border areas between China, Nepal, India, and Bhutan. The Sherpa people, for example, number approximately 150,000 worldwide.

It’s Not About What You Do

People from Western nations often introduce themselves by what they do and this is often among early questions asked when meeting someone new. When traveling on the Tibetan Plateau or throughout the Himalayas, consider the people you encounter, not by what they do, but for who they are. Language can be one way to gain insight into who someone is.