We recently spent Chinese New Year’s Eve and New Year’s Day in Songpan, the old town in Northern Sichuan where our branch office and outdoor base is located. With its old walls still present around the center of the town, Songpan is a place that has an old feel but much of it has been replaced with the typical new development that is made to feel old. This is common around China, but nothing felt fabricated or modern once evening began to approach on New Year’s Eve. Dragons made their appearance near the North and South Gates and made their way to the center of the old town where all the dragon wielding men converged to make the creatures dance together.

Many of the Chinese New Year traditions relate to scaring the dragon Nian away. Red lanterns, red clothes, and firecrackers are all a part of the arsenal aimed at keeping the mythical figure away. As the dragons made their way though the old town streets, spectators and revellers from around the town lit firecrackers underneath the feet of the dragon bearing men. It made for a very lively experience. For the spectator (who occasionally became the casualty of war as firecrackers approached dangerously close) it was if time was reversed hundreds if not thousands of years as the experience of the evening went on. At perhaps more than any other time, Songpan felt every bit of its 2,700 years old.

We will definitely make this a repeat experience every opportunity we can. While big cities have restricted celebrations and fireworks, Songpan still celebrates in a very traditional way that is being lost elsewhere in China. 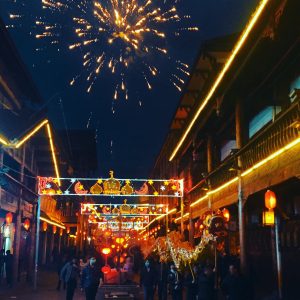