At Xiahe, we’ll guide you through experiences that will reveal new regions of your soul and self. Each year, thousands of Buddhist pilgrims make their way to the Labrang Monastery བླ་བྲང་དགོན་པ, the cultural and religious heart of Amdo. You’ll encounter them circumambulating the vast complex each day, spinning the 1000 plus prayer wheels that line the kora. Immerse yourself in this cultural experience and allow it to transform the very heart of who you are.

Xiahe is located 145 miles (233km) from Lanzhou, the capital of Gansu Province. Xiahe County forms the northwest border of Gannan Prefecture. It is 9675 feet (2950m) above sea level. It is accessible via bus and private vehicle transfers from Lanzhou and other towns within the prefecture. There is an airport with seasonal flights located in the Sangke Grasslands, about one hour away from town.

Xiahe Town is a mixture of Tibetan, Chinese, and Muslim shops and restaurants. Authentic Tibetan food can be found in the restaurants nearest the monastery while good pulled noodles are common throughout the many Muslim establishments.

Key Cultural Sites and Observances in Labrang
Labrang Monastery is the main reason people visit Xiahe. It is a vast site that makes up a large portion of the town. Founded in 1709, Labrang is one of the six major monasteries of the Gelugpa order of Tibetan Buddhism. Kumbum Monastery is the other of the six great monasteries found in the region of Amdo. The remaining four are all located near Lhasa. Entering the monastery grounds requires a ticket.

We recommend joining the guided, English-speaking tour that takes place each morning and afternoon. The tour, given by a local monk, is included with the price of the entrance ticket. Once the tour is completed you may continue to explore the monastery grounds on your own. All our guided Xiahe experiences included the monastery tour as well as a half-day hike around the complex to key viewpoints above the monastery and sites within the complex.

Losar and The Monlam Prayer Festival are the largest cultural and religious observances in Labrang. It is at the beginning of the Tibetan calendar each year. This generally falls in late January or February. It is during this festival that they unveil the great tangka, a religious painting of unparalleled size.

Standard sized tangkas can be seen throughout the temples and local artists can be seen performing their craft in painting studios near Nirvana Cafe, on the river just beside the monastery grounds.

In addition to Labrang Monastery, there are also monasteries nearby that belong to the Nyingma Sect of Tibetan Buddhism as well as a nunnery belonging to the Gelugpa order.

Adventure Opportunities in Labrang
The mountain kora path.
Many large monasteries have more than one kora path. They have one that circumambulates the temple grounds and one usually proceeding up and around the adjacent mountainsides. This is true of Labrang Monastery.

Our favorite way to experience Labrang includes a half day hike beginning in the adjacent nunnery. It leads the willing hiker high above Labrang along the ridge that runs behind all the main temples. It descends near the white stupa on the far end of the monastic complex. From this point, the visitor can continue around the main kora path before disappearing into the lanes and alleys that lead back toward the temple area of the monastery.

The Ganjia Grasslands/Dagajia Gorge/Baishiya Cave
There are two grassland regions near Labrang. The Ganjia Grasslands are about 30-45 minutes away from town. Local herdsmen can be seen with their yak and sheep. Wildlife includes foxes, wolves, Himalayan marmot and other small animals. Birds are in abundance.

Hiking the gorge within the cliffs behind the Baishiya Monastery is a great half-day experience. The scenes are beautiful and there is a well worn path leading to the grassy slopes above the gorge. The entrance ticket includes access to the gorge and the cave area.

The Baishiya Cave is said to be one of the deepest caves on the Tibetan Plateau. It is not to be taken lightly. It can be very dangerous and is not well lit so we do not recommend general exploration of the cave. Visiting the mouth of the cave is doable but we urge great caution regarding exploration within the cave.

Below the Baishiya monastery the grasslands slope downward toward the Bajiao Walled Village. In Tibetan, the name of this village is known simply as within the wall. This eight cornered village has survived for hundreds of years with fortified earthen walls. There is an entrance fee for visiting this village.

The Sangke Grasslands
Sangke is about 8+ miles (13km) from Labrang. The river flowing through the monastery has its source on the Sangke Grasslands. While some areas are commercialized with places for horseback riding and tea drinking, Sangke is also the home to the well-positioned Nirvana Resort which is a great place for hiking, birding, and a good meal in their hilltop restaurant. Private cabins are available as a higher end lodging option.

If you wish to see the Monlam Festival, then visiting during the Chinese/Tibetan New Year is required.

Our Story with Labrang
Adventure Access has its beginnings in Labrang. Our founder, Brian, lived here in 2001-2003. At that time it was much like the wild west with little infrastructure and less order than today. It was during those days of non-stop hiking, climbing, mountain biking and hitch-hiking that the groundwork for Adventure Access was established. Some of our oldest friendships still exist in the community around Labrang. Whenever we visit it is a lot like coming home. 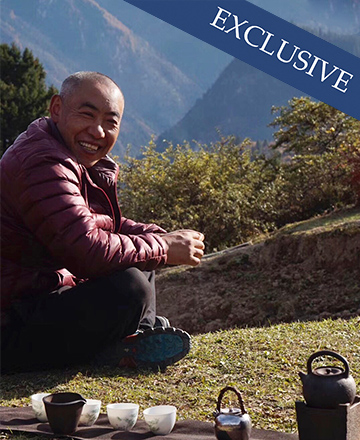