Xiahe is home to Labrang Monastery བླ་བྲང་དགོན་པ which could be considered the cultural and religious heart of Amdo and this is evidenced by the thousands of Buddhist pilgrims that make their way there each year. They can be seen circumambulating the vast complex each day, spinning the 1000 plus prayer wheels that line the kora.

Founded in 1709, it is one of the six major monasteries of the Gelugpa order of Tibetan Buddhism. Kumbum Monastery is the other of the six great monasteries found in Amdo. The remaining four are all located near Lhasa.

There are daily tours offered by the monks, with one English speaking tour each day. Please check upon arrival when the English tour is being offered if you choose to make your own way through the monastery. No ticket is required to explore the monastery but the ticket is required to see inside the temples. This monastery is home to all six schools of Tibetan Buddhism, several of which can been seen on the tour.

There are approximately 2000 monks living at Labrang Monastery, making it one of the largest, most active monasteries throughout Tibet. Most monks at Labrang spend their years studying in the rigorous College of Exoteric Buddhism.

Our favorite way to experience Labrang includes a day hike which begins in the adjacent nunnery and takes the willing trekker high above Labrang along the ridge that runs behind all the main temples. It descends near the white stupa on the North end of the monastic complex. From this point, the visitor can continue around the kora path before disappearing into the lanes and alleys that lead back toward the temple area of the monastery.

Our suggestion is to allow at least 2 nights in Xiahe/Labrang to adequately see the town and the monastery. 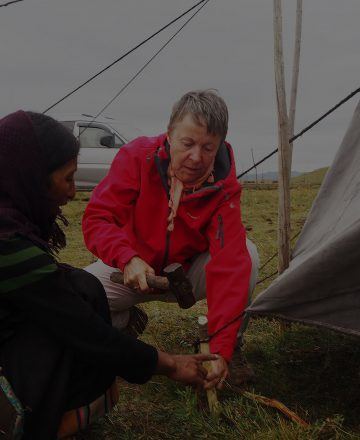